Transport for a world city

The future need for large scale transport infrastructure in London and surrounding regions.

This study looks at the capital city's transport infrastructure and what is needed to ensure London remains a world-class economic hub. It concludes that Crossrail 2 should be taken forward as a priority by the government and the Mayor of London.

The Commission’s final report – Transport for a world city – concludes that, subject to the recommendations within the report, is that Crossrail 2 should be taken forward as a priority. Furthermore, funding should be made available to develop the scheme fully, with the aim of Crossrail 2 opening in 2033.

The final report makes a number of practical recommendations to deliver this outcome. First, sufficient development funds should be released for Transport for London (TfL) and the Department for Transport (DfT) to prepare a hybrid Bill for Crossrail 2, beginning with a revised business case.

Secondly, in developing that business case, it is crucial that Transport for London and the Department for Transport should identify clear proposals to maximise its benefits and increase deliverability of the scheme.

This infographic summarises the economic case for investment in London's rail transport through Crossrail 2. 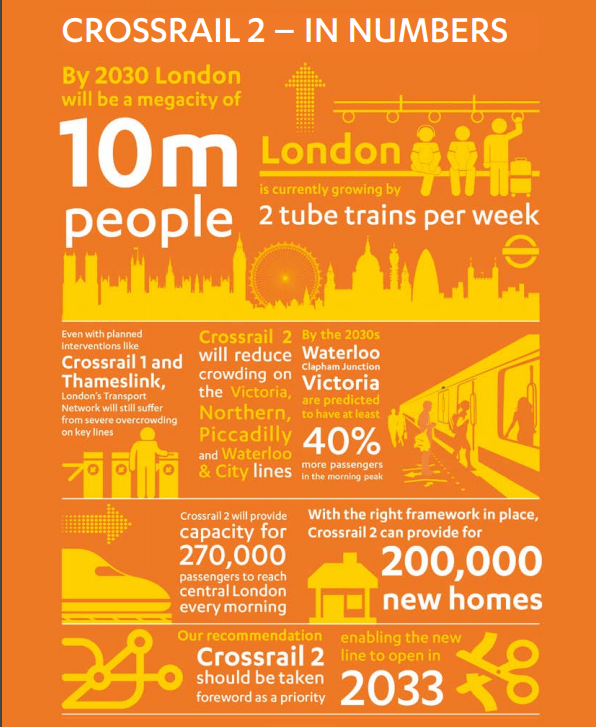 Transport for a world city: Recommendation 1

Crossrail 2 should be taken forward as a priority with the aim of opening in 2033, subject to the recommendations below.

Transport for a world city: Recommendation 2

Crossrail 2 should be at the heart of the new London Plan, alongside existing commitments to upgrades and other pieces of new infrastructure. Crossrail 2 should not, subject to affordability, prevent the development of other high value schemes, particularly where alternative funding mechanisms are available.

Transport for a world city: Recommendation 3

Submit a revised business case for Crossrail 2 by March 2017

Sufficient development funds should be released in order for TfL and DfT to submit a revised business case for Crossrail 2 by March 2017 and aim to introduce a hybrid bill by autumn 2019. The revised business case should include developed plans on costs, funding, housing and stations. TfL estimates the overall development cost at c.£160m, to which TfL should be expected to make a reasonable contribution.

Transport for a world city: Recommendation 4

In developing the business case, it is crucial that TfL and DfT identify clear proposals to maximise its benefits and increase deliverability. The costs of Crossrail 2 are high and therefore every opportunity should be taken to improve its affordability.

The updated case should include detailed options to reduce and phase the costs of the scheme. The most promising option identified to enhance affordability would be to delay the construction of the northwestern branch to New Southgate. This could reduce the costs of the initial scheme in the 2020s by around £4 billion. More work should also be done on the costs and benefits of individual central London stations.
If construction of the north-western branch is delayed, this would also provide the opportunity to consider the case for an eastern branch from Hackney as an alternative.

Transport for a world city: Recommendation 5

A ‘London deal for Crossrail 2’ funding agreement, through which London contributes more than half the costs of the scheme and which includes substantial measures to realise the full housing benefits, should be agreed ahead of hybrid bill submission.
It is vital that a funding package for Crossrail 2 is developed which strikes a fair balance between the contributions made by London taxpayers and businesses and by central government. This should build on the work already undertaken by TfL, which indicated that around half the cost of the project could be funded from London sources.
The government should work with TfL and GLA to explore new funding options, which could include consideration of further devolution. However, even without such devolution, HM Treasury should be in a position to recoup significant receipts from the added Gross Value Added (GVA) benefits and the rising value of property in London.

A London deal for Crossrail 2 will need to cover both the funding of the project and the planning measures required to deliver Crossrail 2’s benefits.

Transport for a world city: Recommendation 6

TfL and DfT in conjunction with other government departments and relevant bodies, should use the next stage of development to set out a clear, transformative plan to turn the proposed 200,000 homes into a reality.

Strong measures to maximise the new housing enabled by the scheme should be included in the ‘London deal for Crossrail 2’–this could include the establishment of one or more development corporations to lead the masterplanning and delivery of new housing and urban realm provision, and revised planning guidance for the whole route. These measures should be considered as a potential model for improving housing deliverymore widely.
For housing provision to be a success across the whole route, the London deal for Crossrail 2 will need to have buy-in from the GLA and London boroughs along the route as well as counties and boroughs outside ofLondon which benefit from the new line. All parties will need to ensure the housing unlocked by Crossrail 2 is sustainable and meets the needs of Londoners and those in commuter regions around London.

Transport for a world city: Recommendation 7

Involve the private sector in development and funding of stations

The opportunity should be taken to maximise private sector involvement in the development and funding of stations and their surrounding areas.
TfL and DfT should leverage private sector capital and expertise to develop selected Crossrail 2 stations, including both the stations themselves and the surrounding land. Development could also be supported by land purchase powers and the ability to assemble sites.

Transport for a world city: Recommendation 8

Following the submission of a revised business case and agreement on the conditions above, the aim should be for a hybrid bill to be submitted by autumn 2019 – the first step towards the railway opening in 2033.

The terms of reference for this study were published by the government in October 2015. They were as follows:

The Commission’s review will be formed of two stages:

In taking forward this work, the Commission should engage with Transport for London, Network Rail and other relevant stakeholders.

The Commission should not through this study consider questions relating to airport capacity. The Davies Commission has already examined this issue in detail.

Stage 1: Establishing the evidence base and identifying the options available

The Commission will need to review and where necessary supplement the work undertaken to date by the Greater London Authority and Transport for London, in order to:

This should include Crossrail 2 but also consider a range of other strategic alternatives for large scale transport investment in London. For each option, the Commission should evaluate:

The Commission should consider the potential impact of both Crossrail 2 and other strategic options for employment, productivity and housing supply in London and the South East.

As part of its review of the evidence base, the Commission should consider relevant international experience in major metropolitan areas, to review how other cities have responded to similar challenges and priorities, and whether there are any lessons to be learned and applied in London.

In parallel, through the second stage of the review the Commission will conclude its work by providing government with a set of independent recommendations on future transport investment in London, including on Crossrail 2, based on an equal and balanced consideration of all available evidence and options. In providing this independent advice, the Commission should:

The Commission should report back to government with its recommendations on next steps by Budget 2016.

The study was supported by an open call for evidence and a review conducted by an expert panel.

Transport for a world city

The Commission’s report recommends a ‘Crossrail 2’ line for London be taken forward as a priority, as part of broader investment in the capital’s transport.

This page shows a calendar reflecting the latest expected dates for Commission reports, publications and events. You can also sign up to receive our quarterly newsletter by entering your email address in the box at the very foot of our homepage; or sign up to receive updates specifically on the programme for the second National...

Data measuring the connectivity within (intra-urban), and between (inter-urban), different places.

Review of the case for large scale transport investment in London

A review by an expert panel of the strategic and economic cases for large scale transport investment in London, informing the Transport for a World City report.

Explore data used in the Commission's research, and gain insights from across UK infrastructure